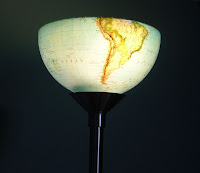 This one's about how to take a cheap, run-of-the-mill standing lamp (from either Walmart or Target) and make it into something special.

First of all, just to set the record straight: I didn't dream up this cool idea by myself. The credit must go to "TanYA" who posted his or her own "what to do with an old globe" project online at: http://bedzine.com/blog/bed-diy/tips-tricks/diy-globe-lamp/ I got really excited when I saw it because we just so happened to have an unused National Geographic globe (one that was lit from within, no less) that was sitting around, slightly broken and unused. (Thank my lucky stars I didn't throw it away!!

I think my globe works better as a shade than the others I've seen online because it was originally intended to be lit from within, so it glows beautifully. So if you have a globe (or find one at thrift shop, yardsale or on Craigslist) that you want to use for this project, do yourself a favor and shine a light under it (once you have it apart) and make sure it's translucent enough to suit you. I suppose an opaque one works fine too, but just keep in mind that directional lighting is all it's going to be good for.


Taking it apart: Unfortunately, I was too impatient to find a camera and snap some photos as I did this, but I can tell you that getting the globe to split wasn't as hard as I feared it would be. It seems that most globes (the plastic ones, at least) are held together at the hemisphere with just a narrow strip of tape, which you can neatly cut down the middle with a razor blade. It's tedious, (and a little scary, as it's easy to slip off target and possibly nick yourself - so be very careful and go slow) but once you've gotten nearly all the way 'round, your world will start to come apart. tee hee

Now, the really hard part for me was getting the globe out of its stand. I had a plastic one to work with, so it was possible to cut through it with a saw. This part will really depend upon how your globe is put together; so I'm afraid I don't have much in the way of helpful tips to offer here.

Now, for the lamp portion, here's your first helpful tip: Unplug the lamp before you begin. (OK, I'm done with the patronizing.) 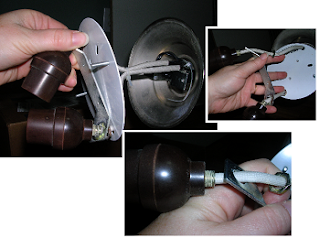 I had an uplighter lamp with a ruined plastic shade sitting around. So I just took off the shade (held on with butterfly screws) and unscrewed the plate inside, as well as the sockets and the bracket holding them in place so that everything was "loosey goosey" enough to pass through the approximately 2" diameter hole at the base of my half a globe. 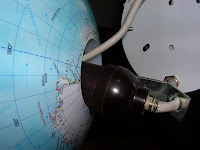 A quick comment here: I used the southern hemisphere for this style of shade, so all the writing on it would be right-side-up. Of course, you don't have to, but make sure this is decision you make on purpose and not just how it turns out because you weren't paying attention. You can always use the northern hemisphere for a table lamp shade.

The next part was pretty fiddly and required repeated trips to the power drill, because the old lamp shade had been held onto the lamp with two bolts and butterfly screws, which meant that I had to figure out where in my new globe shade to drill similar holes. And, of course, I didn't want the shade to be crooked, so I needed to find the absolute center of my hemisphere and make sure it lined up with the absolute center of the metal plate that would be serving as the base upon which the shade would sit. 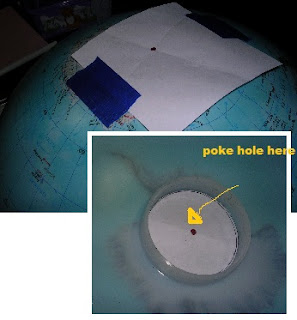 I used a piece of paper held in place w/ painter's tape for a place to mark dead center on the globe half, poked a hole through which I could peek to visually line it up with a dot I marked at the dead center of the plate.

Then I darkened the tips of the bolts for which I needed holes in the globe half so that I could juuuusst make out their shadows from the inside of the globe half as I held it in position with a light shining behind the whole thing. Very difficult, and, no, I didn't manage also to get a photo of any of this. BUT I have this important lesson to pass on: Do not throw away the old shade before you are finished with your project. Instead, save it to use as a template for marking all the holes you're going to need to drill into your new shade.

After this, it was just a matter of bolting everything together (which, again, was kind of fiddly because I wasn't willing to cut away more of my globe half in order enlarge the hole enough so that I could reach the various bolts from above with my screw driver). In fact, there is a gap between the surface of my new globe shade and the edge of the decorative "cup" in which the metal place sits - but I quickly determined that this isn't particularly noticeable. On other types of lamps, it might be necessary to cut away more of your south pole. 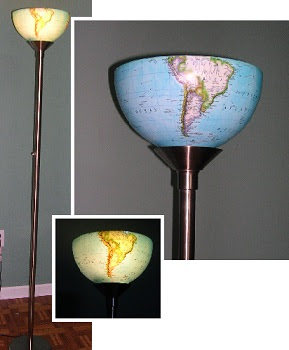 As final note: It's probably best not to use an incandescent bulb - or at least not a high-wattage one - because incandescents throw out a lot of heat. Since your globe was probably not originally designed to be a lampshade, and you don't want to add a fire hazard to your home decor, it's probably best to use a compact fluorescent with a homemade shade.