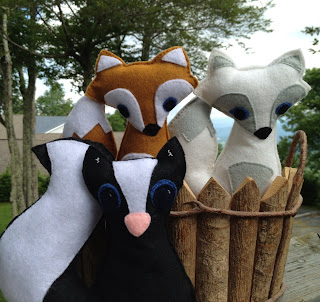 OK, so I haven't posted anything to this blog in aeons . . . but I have still been making things.  I've got lots and lots more unusual ideas to share here. Over this past winter, however, a lot of these things have involved felt: Felt flowers, appliques, and cute felt animals, mostly.

You see, this past winter, we moved to Beech Mountain, North Carolina.  And starting the very next day after we moved into our new home, it snowed a lot.  I mean a LOT.  Even the locals were impressed. So we spent many a long evening sitting by the fire.  What do you do when you're in a situation like that?  Well, I found out that I have an urge to make pretty things out of soft and colorful felt - small things that enable me to work pretty much wherever instead of having to slink off to the solitude of a spacious sewing room (which I no longer have).


Well, this past winter, just as our area's snow allotment was especially generous and was starting to stack up quite a bit, meaning my time by the fire increased and, consequently, my felt creations . . . well, they were starting to stack up too.  My husband (no doubt inspired by a fitful dream one night in which he discovered he couldn't work on his own stuff because our shared project room was buried in felt animals) suggested:  "Why don't you set up an Etsy store, honey?"

So, quite in line with my usual alacrity, when it comes to actually doing something about a nifty idea that turns me on, several months later . . . I have finally done it:  I now have an Etsy Store.  Had I needed to come up with a new name for it, Alex would still be waiting for some sort of pressure value to relieve him of all of my new creations; but instead I chose to name it after this blog. After all, the last word still is  . . .  bliss - mine, to be exact.  If in selling a few of my visions made incarnate, I spread this bliss I feel to others and finance the purchase of more soft felt, pretty fabrics, and colorful paints, etc., so much the better!

If you wanna' be part of this cycle, I invite you to visit my Etsy Store: The Last Word Is Bliss!